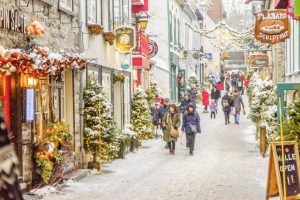 Many people will surely love to travel and try Canadian history and culture. This country is on the north end part of America. It’s also the second-largest country by total area in the world. Its capital is Ottawa, and its land area mostly consists of forest and prairie. A lot of enjoyable things can be found in this country, especially in their tradition. Here are some Canadian traditions you may never know existed.

Canada is famous for its maple syrup. The country is producing 80 percent of the world’s maple syrup, especially from Quebec, which provides the most significant amount. The amount of maple syrup depends on the weather. Maple trees must have a colder temperature at night and warm temperatures during the day to produce sap.

People in this area take pride in their maple syrup. It is shown in some of their cuisines, where they put a lot of maple syrup.

The polar bear swim started in the year 1920s in Vancouver, where people ( not real bears) get naked and plunged into freezing waters. Its started with only ten people before, but until now it has become a tradition that many Canadian folks do every year.

Canada is said to be the sole country to still participate in the tradition of New Year’s Levee. This tradition is dated back since the 1600s and traced its roots from European countries. Its an event where each governor-general or province’s lieutenant governor marks the start of the New Year. People pay respect by touring the Government’s house or when Canadian forces allow guests in their homes to pay respect.

Haloween may not be a unique event in Canda, but this country surely makes this one of their most important events. In Vancouver, the use of fireworks is only legally permitted in Halloween and not in any other event unless you obtained a permit. Due to this, Haloween in Canada is a known billion-dollar industry.

Canda has a lot more to offer since their culture is a product of both American and European influences, If you’re interested to know more about the country, why not take a vacation and experience it for yourself. Secure your Canada visa and make a journey of a lifetime.